Eve is a multipurpose, web based agent platform, in which existing web technologies are used. They provide an environment in which software agents can be developed. Eve is defined as an agent model and a communication protocol, which can be implemented in many programming languages and runtime infrastructures. This part of the documentation provides an introduction into these generic elements of Eve.

For a good understanding of Eve, it is important to look at its concept Agent. The basic definition of agent is: A software entity that represents existing, external, sometimes abstract, entities. Examples of such entities are: human beings, physical objects, abstract goals, etc. To be able to function, the agent needs to be able to run independently of the entity it represents. This autonomous behavior requires a basic set of capabilities, which Eve provides for its agents. These features are: 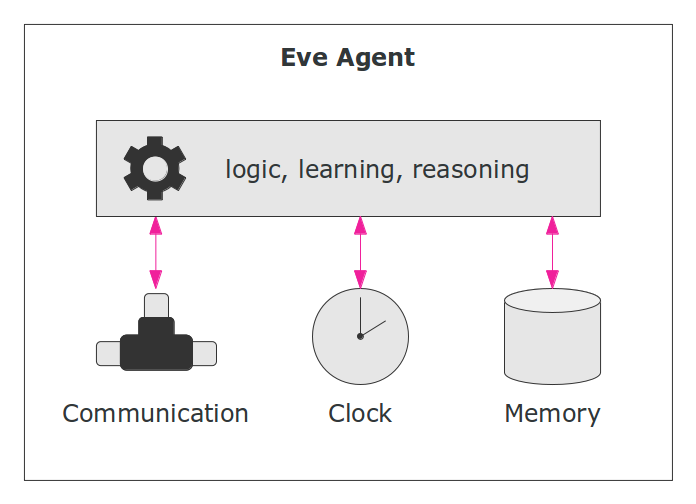 The main reason for providing a separate memory capability to the agents is that, in most implementations, Eve agents have a request based life-cycle. The agent is only instantiated to handle a single incoming request and is destroyed again as soon as the request has been handled. Only the externally stored state is kept between requests. The agent identity is formed by the address of its state, not by an in-memory, running instance of some class. The scheduling capability provides requests at scheduled times, thus instantiating the agent at that time.

Implementation caveat
The model has some design constrains that are important to understand: It is possible that multiple instances of the same agent are running simultaneously and in some cases it is even possible that multiple threads access the same instance in parallel. Besides the provided state service (and potential external databases) an agent should be stateless, without global or class level scoped variables. It is possible in some implementations, to cache bootstrap information in the agent instance, but there is no guarantee that the instance remains active, nor that the next request ends up in the same instance (or even in the same execution environment!). If cache structures are used, be certain to make them completely thread-safe!

This model mimics the way modern webservers handle servlets, allowing any servlet to become an Eve agent. Out of the box, a single agent (=single state) can therefore execute requests in parallel, multi-threaded, and (depending on the state-implementation) distributed among multiple servers. This model also allows for easier handling of asynchronous agent designs.

The agent model is based on request driven instantiation. The requests, that trigger this instantiation, are JSON-RPC encoded. In the Protocol section, this protocol is further defined and described. Using JSON as its base, Eve is highly programming language independent; for most mainstream languages there are existing JSON handling libraries. Any implementation that adheres to the described protocol and basic agent model, is therefore considered an Eve implementation. This high level definition allowed effective reuse of existing tools and protocols in the implementation of Eve.

Eve is defined by its agent model and its RPC protocol. But the JSON-RPC messages still need to be transported from one agent to another agent, possibly crossing to a completely different platform. The two implementations (on the different platforms) need to share a common transport service for this. Currently the Eve implementations support HTTP and XMPP as transport protocols, but it's relatively straight-forward to e.g. implement a ZeroMQ transport. If two implementations share a common transport service, its agents can work flawlessly together. For example, this allows a Java cloud agent to communicate with an in-browser Javascript agent, through JSON-RPC over an XMPP transport.

In the current implementations Eve is working on servlet based servers (e.g. Google App Engine, Amazon Webservices, etc.), as standalone applications, on mobile devices (e.g. Android) and in-browser, through its Javascript implementation.